International Recognition for Erin & Our Lady’s

Glencarn sponsors Girls U16 Basketball in Our Lady’s

Pictured in Castleblayney Credit Union at the presentation of tops to U15 Girls Basketball team in Our Lady’s ahead of their All Ireland Semi final are Directors of the Board, Ramona Cronin, Paul Gibbons President &Tony Conlon, Principal of Our Lady’s, Mr Eddie Kelly and team members, Erin Hamill & Sally Moloney.

The U15 girls travelled to the National Basketball arena in Tallaght last week to compete in the All-Ireland Semi Final. Our Lady’s started well with scores from Erin Hamill helping to settle nerves as Our Lady’s led by 5 points at the end of the first quarter. In the second quarter it was Limerick who seemed more comfortable on the ball and had a 12-0 run to put them 5 points ahead at half time. Our Lady’s never gave up and in the final quarter narrowed the gap to 3 points, however the experience of Crescent Comprehensive Limerick showed and Our Lady’s couldn’t overcome this gap. The girls will no doubt learn from this experience and will continue to be a major influence at basketball competitions at regional and national level.

Irish Basketball Internationals in Our Lady’s

It is with great pride, Our Lady’s now has two students playing at the top level in Irish Basketball.

3rd year student Erin Hamill recently earned her first international cap with Ireland with a victory against Scotland. Erin has been a great asset to all teams in which she has played with in her short time in Our Lady’s. Erin will continue to train with the U15 panel throughout the summer in preparation for U16 European Championship competition in 2017.

Nadine Rice has also made the Irish U20 team. Nadine has been a huge part of basketball in Our Lady’s, captaining her team to All-Ireland Semi Finals in 2014. Nadine, who has already earned her first international cap in 2013 is now preparing with the U20 team ahead of European competition in Montenegro this summer.

Under 14 Girls
On Tuesday Our Lady’s Under 14 hosted Malahide CS and Ursline Sligo.
Despite an excellent team performance Our Lady’s lost out on a semi final
spot to a very strong Malahide CS.
Our Lady’s then had a break in play while St. Vincents of Cork conveniently
saw off Malahide Cs, meaning that the semi-final spot came down to the final game.

The first year girls have reached Regional Final after defeating Dunshauglin
in the semi final.
The girls started well with Muckno Lakers players

Aoife Burns and Jodie
McQuillan getting early baskets and settling the girl’s nerves. In the
second quarter Melissa Carr and Sarah Wilsons defence excelled and some
excellent offences plays seen Our Lady’s lead in 12-5 at half time. Our
Lady’s really settled into the game in the 3rd quarter with Caomihe Brennan
working hard defensive and setting up some excellent offences.
Our Lady’s now face Ballymahon in the Regional final which will take place
after the Easter holidays.
2nd Year Girls
The second year girls are in action again this week when they travel to
Virginia to compete for their spot in the regional final. Our Lady’s and
Virginia finished joint second in the league, Virginia gaining home
advantage in the head to head, when a weakend Our Lady’s failed to over come
a strong Virginia side. With Our Lady’s now back to full strength this game
promises to be a close incounter.

Nadine Rice has also made the Irish U20 team. Nadine, who has already earned
her first international cap in 2013 will rejoin Irish training at the start
of next month. Nadine has been at the heart of the basketball teams in Our
Lady’s and has been a constant and driving force at various age groups. She
numbers many accolades to her name in school basketball with the most
notable one being part of the All Ireland Cup winning team while only in 3rd
Year.

All roads lead to Garvaghy next Wednesday 20th January as U16 Girls in Our
Lady’s prepare to do battle against Loreto Convent, Milford, Co Donegal in
the Ulster colleges U16 semi final. The girls hope to advance to the final
stage, and emulate the success of the Senior girls who were crowned Ulster
champions in the U20 competition on 14th Jan last. 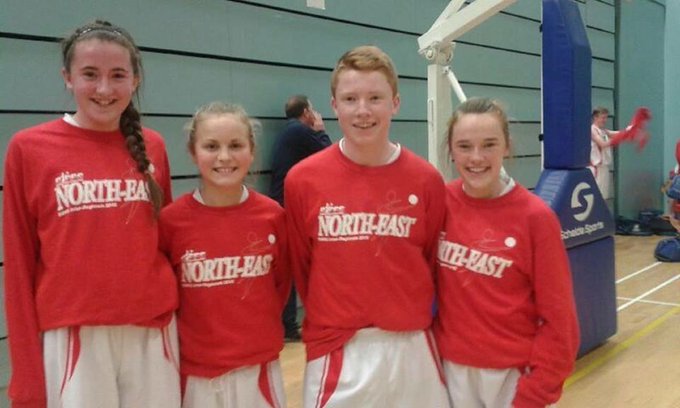 Pictured on the left is Erin Hamill, Our Lady’s who has
been selected to train with the Irish U15 Basketball team. Erin is pictured
here with representatives from her school Jennifer Duffy, Robbie Hanratty &
Grainne Tibby who represented the North East Basketball Region at the
National Finals in Galway recently.  International Recognition for Erin

Erin Hamill, a third year student at Our Lady’s Secondary School,
Castleblayney was the toast of the school in recent days having been
selected to train with the Irish U/15 Basketball team.

Erin is an excellent player who has a great ability to read
the game. Erin also captained Our Lady’s U16 team to the regional final
this year and was an excellent addition to Our Lady’s senior girls’ team who
also reached the Regional Semi Final this year. An outstanding achievement
for a student who is still only 14 years old. Erin has been a
prominent player on basketball teams at Our Lady’s during her time in school
and was the driving force behind the Girls U/14 Basketball team that reached
the All Ireland ‘A’ final in Tallaght last year.

Our Lady’s Secondary School Castleblayney reached the final of the U/14 ‘A’ Basketball Final after a hard fought win over Scoil Chroist Ri, Portlaoise.

In what was a very tactical game, a strong defensive effort from both teams saw a draw at the end of the first quarter. However in the second quarter Scoil Chroist Ri became more dominant as they rallied an impressive 15-0 to see them lead 23-7 at half time.

Scoil Chroist Ri again started the third quarter strong scoring 7 unanswered points increasing their lead to 22. After a time-out and some shrewd change in tactics by team coach Ms. Mc Quillan the game started to swing in Our Lady’s favour. Grainne Tibby and Jennifer Duffy pressed the opposition ball carriers and Erin Hamill started to dominate rebounds. Our Lady’s defence was particularly impressive and supported by the roars of the first year students who had travelled to support them they started to make their way back into the game. Sarah Burns controlled the ball excellently on the point to help break down a strong zone from Scoil Chroist Ri. Our Lady’s gradually chipped away at the lead to trail by just 2 points entering the final quarter.

With Our Lady’s building in confidence they continued with their strong defence and some impressive shooting in attack and eventually took the lead 2 minutes into the fourth quarter. However Scoil Chroist Ri did not give up and with 56 seconds on the clock Our Lady’s led by just 1 basket. Eventually in what was an exciting game Erin Hamil sealed the victory with 20 seconds left to put Our Lady’s ahead by 4.

In the final the girls faced a very experienced St. Vincent’s side. Our Lady’s started well putting up a strong defence. However St Vincent’s soon began take advantage of small gaps in our game seeing the lead at half time 21- 7.

Our Lady’s fought hard throughout the second half however the experience of the St Vincent’s side saw them see of a late comeback from Our Lady’s to win the game out 39-17.

Despite the loss in the final team coach Ms. Mc Quillan was fulsome in her praise for the girls and their performances on the day, “they are a fantastic group of girls, not only are they extremely talented and skilful but they also have the determination and commitment to match this. Never was this more evident in the semi final when they came from 20 points down to win by 4 points. I am very proud of the efforts of all the panel throughout the year and I have no doubt we will be seeing more from this group of girls in provincial and national competitions during their time in Our Lady’s

Nadine Rice from Our Lady’s representing Ireland at basketball during the summer.

Nadine Rice is pictured here
with Jackie Dunne and Gerry Kelly of Basketball Ireland as she receives her
international cap for Basketball.

Nadine Rice who has made the Irish U20 team & will re-join Irish
training at the start of next month, has already earned her first
international cap in 2013 .

Nadine was the toast
of the school in recent days having received international acknowledgement
of her sporting abilities in basketball by being capped for Ireland in June
of this year.
Nadine has been at the heart of the basketball teams in Our Lady’s and has
been a constant and driving force there. She numbers many accolades to her
name in school basketball with the most notable one being part of the All
Ireland Cup winning team while only in 3rd Year.
Nadine will rejoin training with the Ireland U-19 squad this later year.
Congratulations to Nadine and no doubt this is only the start of Nadine’s
sporting career.

The senior girls  qualified for the “A” All-Ireland semi-final in Tallaght on March 13th where they were narrowly beaten.

1st Yr Girls started their campaign in the new year and gave good performances. they qualified for the regional semi-final where they faced a very strong Virginia team.  Unfortunately the girls were defeated by 3 points.

2nd yr Girls travel to Loreto Beaufort in Dublin on Sat April 5th as runners up for the All- Ireland qualifiers.

There are no upcoming events.